CBD and THC, continue to grow in popularity due to their varying health benefits. But how different are the two? In this article we discover the relationship between the two cannabinoid compounds and reveal the differentiating factors the two take on upon impacting with the body.

For starters, the two compounds are almost identical, and share the same chemical makeup: 21 carbon atoms, 30 hydrogen atoms, and 2 oxygen atoms. However, what differentiates the two is the a single atom, which you can observe in the illustration below. But even the slightest single atom in difference can make a big difference. 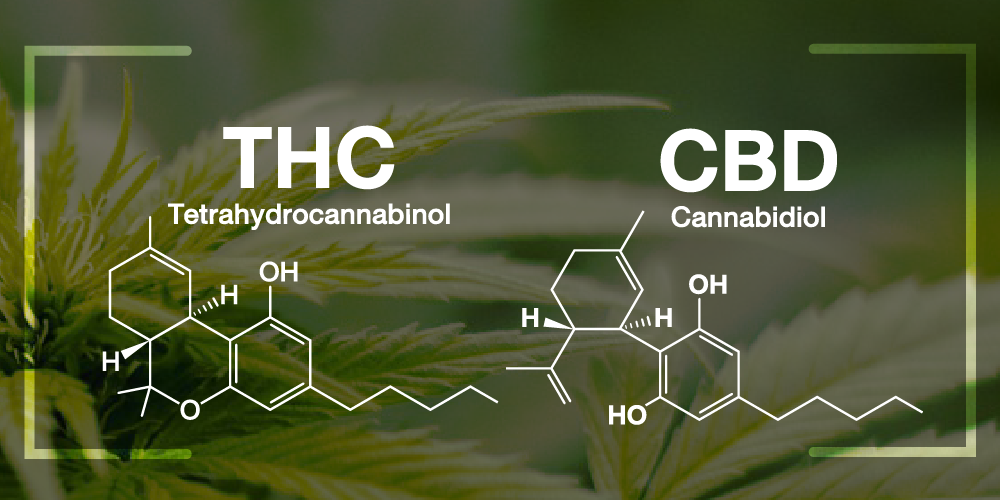 Before we move forward, let’s talk about Cannabinoids and the Endocannabinoid System and how they work.

Now to dive into the differences between CBD and THC, while CBD and THC both bind to the CB2 receptor, they interact with the CB1 receptors in different ways.
Because of its difference in molecular structure, THC is able to bind directly with CB1 receptors, thus creating signals that are sent to the brain that generate the psychoactive effects of “getting high.”

While THC certainly offers tremendous health benefits, many would rather choose CBD as an alternative to avoid the psychoactive effects and having it turn up in lab results if applying for a job. The other added benefit is that when using CBD as opposed to THC, yin many states you don’t run the risk of breaking the law (check here to see your state laws).

Speaking of CBD and the law, due to its ability to induce mind-altering effects on the user, THC has been classified as an illegal substance in most countries around the world, including the United States.
While CBD is still in the gray area of the law due to unclear laws and its close relationship with THC, it is much safer to use from a legal perspective.

Under the US Farm Bill of 2014, CBD derived from hemp is federally legal. While this is a federal law, it does not legalize CBD derived from marijuana, and it does not overrule state law. Because states can determine their own laws pertaining to CBD, and the distinction between hemp and marijuana is still unclear to many, the legality of CBD from state to state has become very confusing.

Despite the current legal status of CBD, we’ve made some huge strides forward and are definitely heading in the right direction, especially with the upcoming US Farm Bill of 2018. Within a short time, the legality of CBD should be clarified once and for all.

Subscribe
Take 15% off your first purchase
and get offers and coupons to your inbox
ENJOY 15% OFF!
Continue without promotion
Skip to content
This site uses cookies שמג Google hosted fonts to provide you with a great user experience. By using our site, you agree to our use of cookies. Click Continue or just keep browsing to accept.Continue